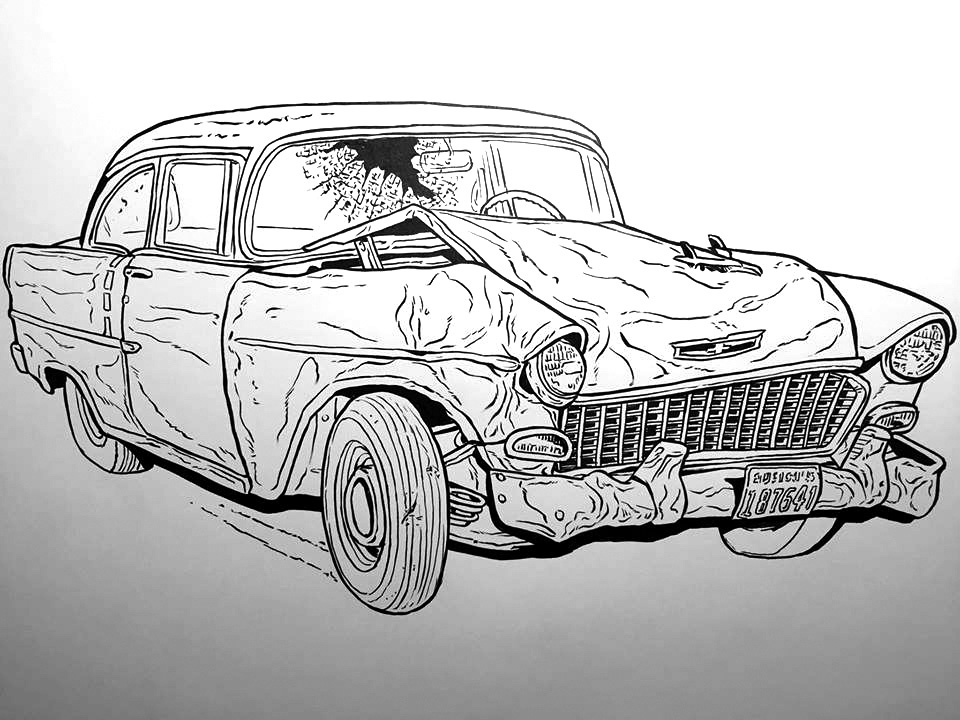 Wrecked cars have been a fascination of mine for much of my life. I wasn’t sure why exactly until I first started posting a few of my latest ink drawings on Facebook. There was quite a lively response. They surprised me and I was pleased that so many people liked them or had an emotional response to them. 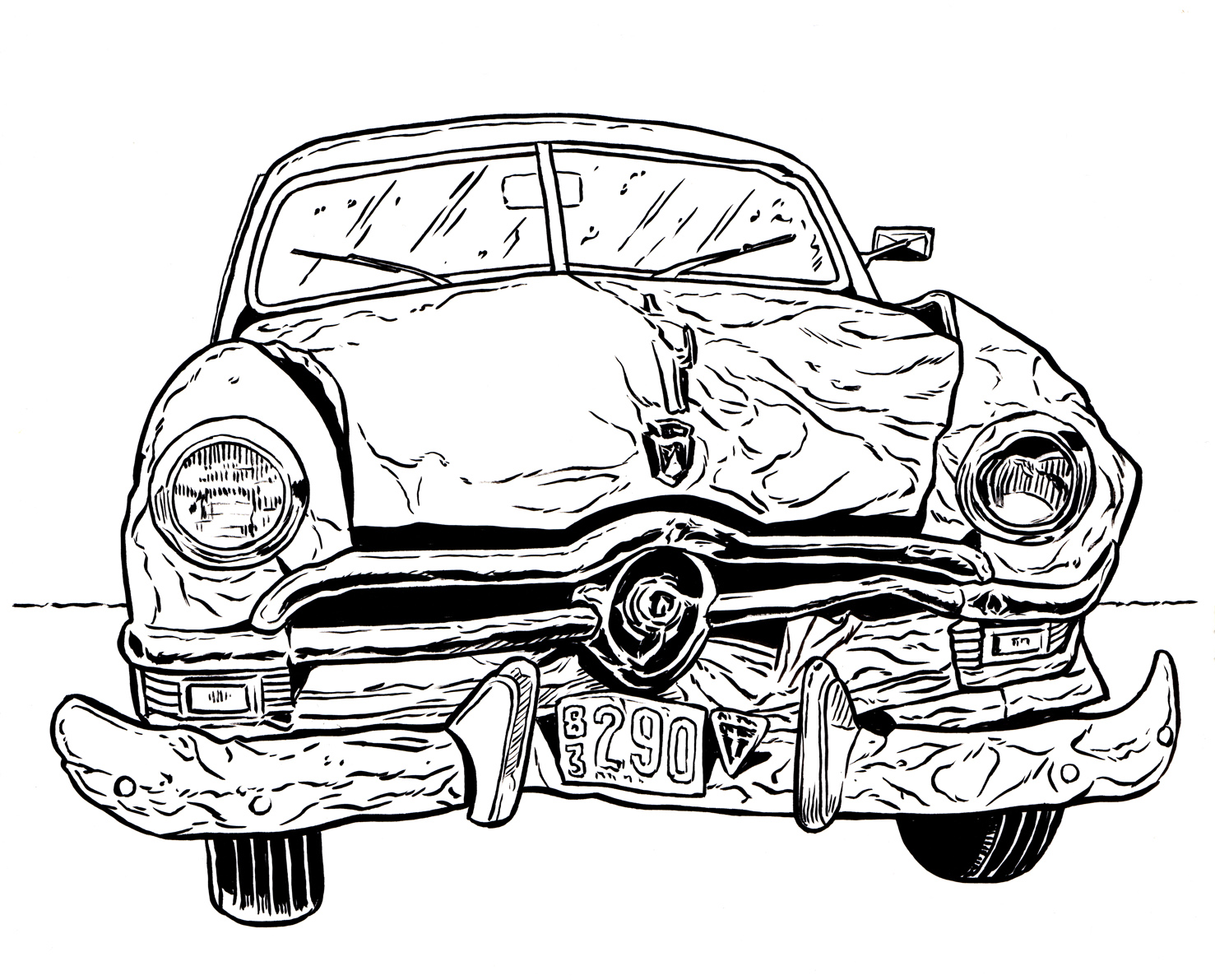 Many of the comments confirmed that I am not the only one to find something fascinating in these studies of wrecked automotive machinery. However, that was not the only explanation that revealed itself. 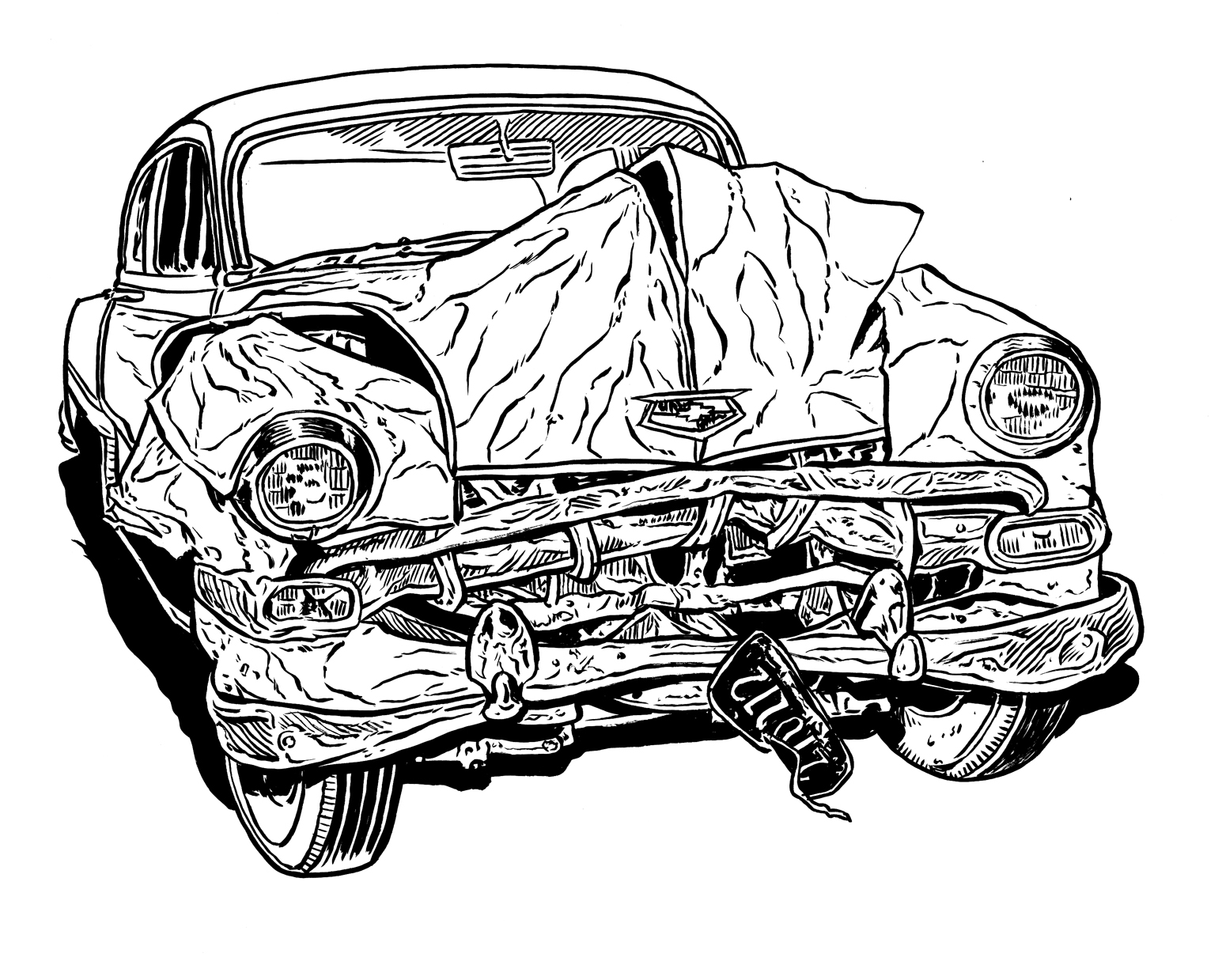 Among the different feedback comments, one in particular resonated with me. The reply in question was from one of my oldest childhood friends. A woman I grew up with, went all through school with and whose family was close to mine for my entire childhood. Her name is Ann. And of all the replies and comments associated with my wrecked car posts, only Ann knew, or remembered, or made the connection that I had been involved in a very serious car wreck of my own many years ago.

Only Ann knew that I escaped that accident terribly injured, but alive. The accident itself occurred a few years after high school when I was in college. It was just before Christmas and I was home on Christmas break. My girlfriend at the time was also home from college and we were doing some last minute shopping for the upcoming holiday. 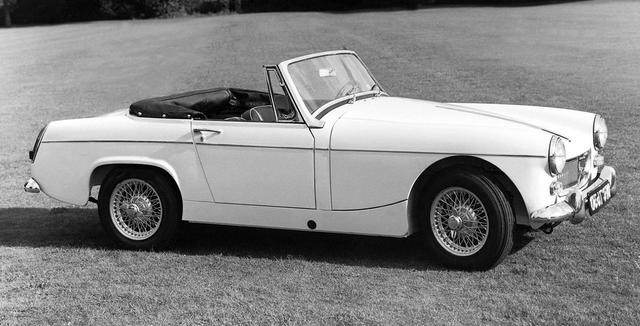 At the time I drove a 1967 MG Midget and it was the car of my dreams. I would just drive it for the fun of driving. I took it everywhere. Short road trips, long road trips, and especially drives on curvy country roads.

That night a few days before Christmas, the roads were clear. No snow, no ice. We were driving on a notoriously tricky four lane which had no center guardrails, just the double painted yellow lines separating oncoming traffic. I had just passed a trailer truck and was entering the last downhill curve that proceded our destination, a fairly new mall for the early 1970’s. A place we could easily finish our last-minute gift buying.

I have no recollection of what happened next, but was “told” days later by both my girlfriend, the State Police and my parents. 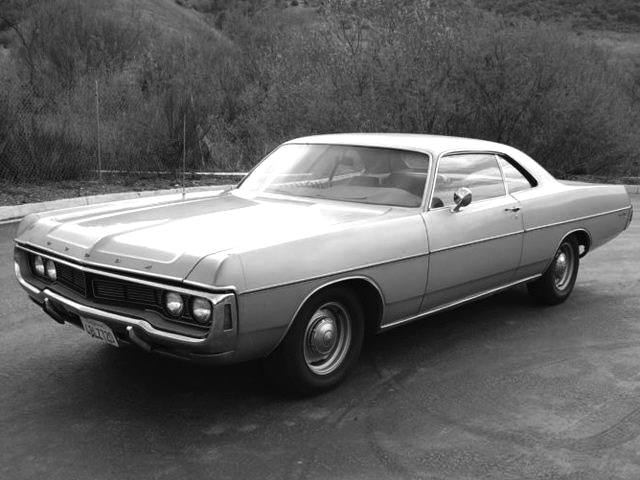 Apparently, a 1970 Dodge Polara in the passing lane of oncoming traffic, traveling about 50 mph, crossed the double yellow line in the center of the highway and hit my MG head-on. After on-site anaysis of skid marks and eye-witness accounts it was established that I was going about 50 mph as well. However, the much larger car plowed into the left front of my car driving the smaller MG out of my lane and into the slow lane. The truck driver I had just past swung his big rig into the hillside to his right to avoid crushing me from behind. An act that no doubt saved my life as well as my passenger’s. The truck driver would remain at the scene and give emergency crews and the State Police his statement of events as he witnessed them. I was told by others that he also stayed to help the rescue crews free me and my passenger from the wreckage and he remained on the scene well after we had been taken to the closest hospital emergency room. I never got this truck driver’s name, but I owe him my life as much as all the others who saved me.

I awoke briefly in the hallway of the emergency room and was told by a nurse that I had been in an automobile accident. She asked me to stay calm and still. But that was all I remembered until a few days later when, under heavy sedation, I was in the hospital waiting for the swelling to go down from my various injured areas before surgery would commence. I can barely remember that time, but I’m aware that many people came to see me and that I must’ve looked absolutely terrifying. No one would let me see myself, my father telling me much later that I looked like a monster from a horror movie. I did, however see a slightly distorted reflection of my disfugured face in the chrome head mirror of one of the doctors who was examining my face at one point.

My jaw was broken, having bent the steering column with the thrust of my forward momentum. Left ankle was crushed, a result of the clutch pedal and brake pedal driven together on both sides of my ankle from the engine coming back into the firewall. My right knee was also smashed pretty good from slamming into the small metal dashboard in the MG. Most serious of all for me, a young would-be artist with a hope for a future as an illustrator or cartoonist, was the crushed thumb on my right hand.

No internal injuries, but that finding would prove to be false many, many years later. Stuff like that has a way of catching up to you.

It took the fairly new apparatus known as the “Jaws of Life” to cut me out of the car. Later I learned that I screamed the entire time they were cutting the steel trapping me in my beloved MG. A process that took about 20 minutes…though I remember nothing of the collision itself, my rescue, nor much of the days following the accident.

Miraculously, my girlfriend sustained only minor injuries compared to mine. A broken nose and a broken arm. Gratefully, no hospital stay required.

I was taken to a regional hospital because that was the closest emergency facility. My intial assessment was done by a team of physicians at that hospital. An assessment based on the capabilities of a regional hospital. A hospital with a more than capable staff of physicians and health care professionals. But it wasn’t a big city hospital with the kind of specialists that big city hospitals usually had back in the early 1970’s.

Here fate stepped in and did me a big favor.

My father was making a formal report about the accident to the local State Police barracks, the law enforcement division for the area where the accident occurred. As my father was talking to an officer at the front desk, describing the accident, my injuries, the prognosis etc.,  a well-dressed gentleman in a suit was also at the counter that day. He turned to my father, apologized for interrupting his narrative and addressed my father in a forthright manner.

“I couldn’t help but overhearing your description of your son’s accident and the injuries that he’s sustained.” said the man.

“I take it that no surgical procedures have been performed at this time?” he asked.

My father, thoughts still clouded by the shock of the accident and the future of my health, just shook his head and said, “No, they’re waiting for the swelling to go down before they can do any surgery. They say it might be a few more days…”

At this point, the man introduced himself as the Chief of Surgery from Mercy Hospital in Pittsburgh and went on to tell my father about their Chief of Orthopedic Surgery, Dr. Parry, a doctor well-known as the very best orthopedic specialist in the tri-state area.

My father and the man talked at length about my injuries and the regional doctors’ talk of fusing my right thumb and my left ankle because the injuries were so severe. The Pittsburgh doctor insisted that my father consider transferring me to Mercy for a second opinion before committing to a fusion of any joints.

As a result, my father agreed and the Pittsburgh specialist arranged to have me transferred as soon as possible to Mercy Hospital in Pittsburgh. I remember most of the hour-long trip in the ambulance to Mercy, two EMTs sitting in the back with me, keeping me calm and checking instruments hooked up to me.

The team assembled at Mercy came up with a more promising diagnosis and were able to complete all of my surgeries in one long session. Almost five hours later the jaw was wired and set and neither my drawing hand thumb nor my left ankle were fused. The right knee cap was salvaged for some reason and wired together. Although I would have some restricted mobility in both my right hand and left ankle, the expertise of the doctors and the chief surgeon of orthopedics allowed me to have a more normalized life after the accident.

During one of the few post-op visits from my orthopedic surgeon that I can recall this many years later, I remember that he was first person who actually told me how lucky I was to have survived that accident. He told me he knew of my artistic aspirations and told me that I had been given a second chance, and that I should go out and be that artist that I dreamed about. There was nothing to stop me.

I would see this doctor for the next two years with follow-up visits as my injuries continued to heal and I made progress with walking again and gaining dexterity with my hand. It was a lengthy recovery from some serious injuries, but his words from that one post-op visit hung with me. Even today, when faced with setbacks of any kind, or losses that seem unbearable, I remember that I was given a second chance. That I didn’t die in a car wreck at 19.

However, when I was doing these latest wrecked car drawings, I wasn’t thinking of my own wrecked car experience. At least not consciously. Not until my friend Ann asked me if these new drawings had anything to do with my own accident so many years ago. I have to admit that her question caught me by surprise. Completely.

And yet, every time I pass an accident on the highway, the emergency lights flashing, survivors standing off to the side as their smashed vehicles are being towed, or the ambulances standing by in a “ready” position off to the side of the road…

Every time I pass an accident I’m thinking about my own brush with death. My second chance.

So after Ann’s question, I had to rethink my motivations for drawing these wrecks now, at this time in my life. (And the others. I’ve only posted a few here.) I’m not entirely sure these drawing are motivated by my own accident, but then again it seems logical that they could be on some level. Doesn’t it?

I’ll let you know if I come to any final conclusions. 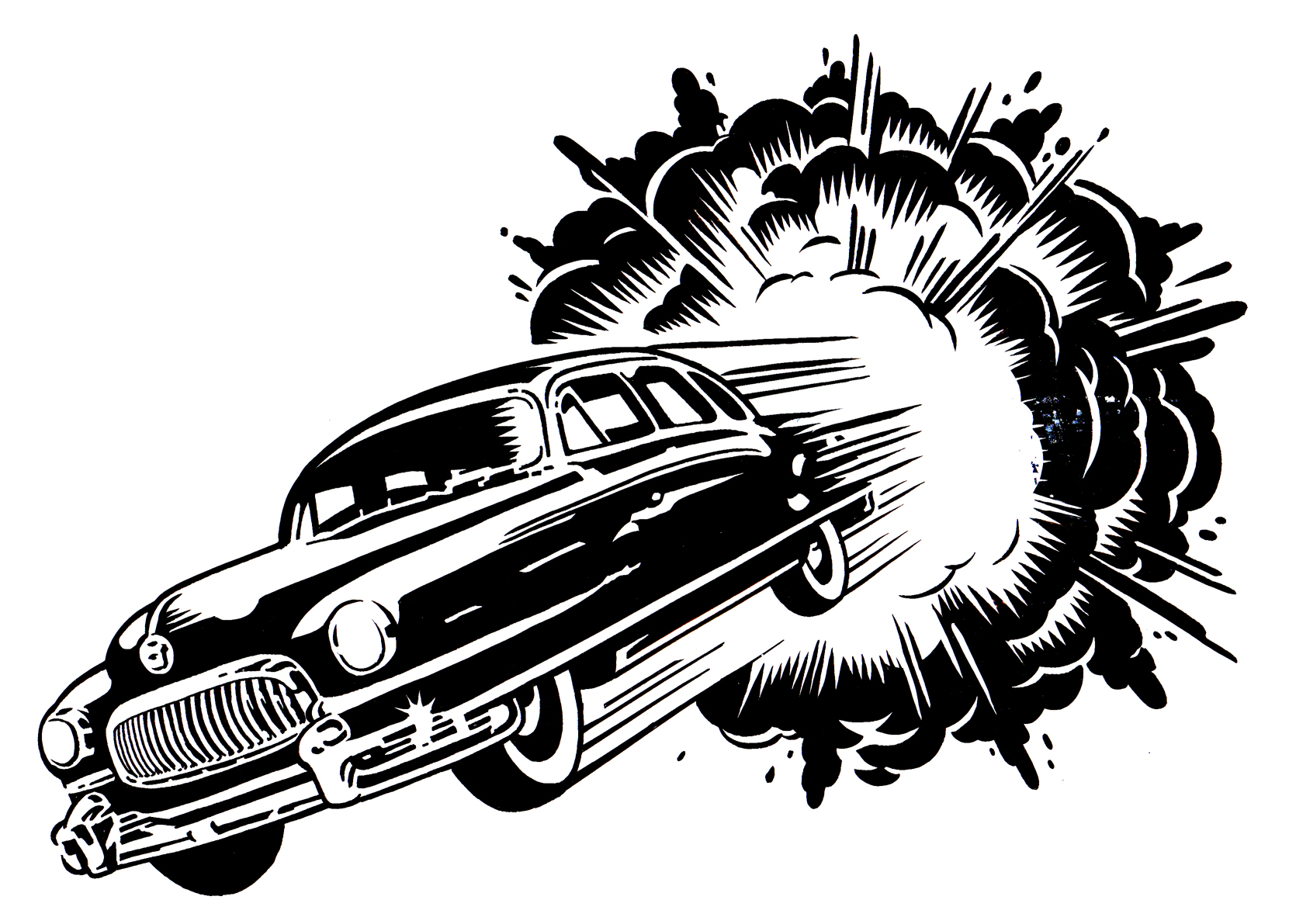 The Exploding Nash – NOT a wrecked car.