When I finally moved back to the small town where I was raised (in Southwestern Pennsylvania, after a 20 year hiatus on the west coast) I was full of hometown food nostalgia. Of course, I’m talking about the foods I grew up with served by some of the same places that were still here when I left. Giant fried fish sandwiches from the Original Oyster House in Pittsburgh,  certain types of pizza, snap-when-you-bite-em hot dogs with chili from the Original Hot Dog, Capicolla subs from the Triangle Grill in Swissvale etc. These were the landmark foods I’d missed in California and Washington State and I couldn’t wait to reacquaint myself with their tastiness.

What I had not imagined was an encounter I had with a simple cheeseburger on a chance visit to the Isaly’s still operational on Main Street in Irwin, the small town of my formative years. I had originally taken my wife Kate to this legendary dairy store to show her the interior “design” elements in the old place. Decorative wall treatments and signage my father, a contractor had created when he did a massive remodel of the Dairy Store in the early 1970’s before I’d finished college and moved to San Diego. I was still working with pop, still in college and assisting a small crew of talented and capable young men in the major renovation. We had to do all of the work during the night so the store could remain open for business during daylight hours.
The menu sign elements and color scheme of the interior were basically the same as when we had completed the remodel over 20 years before. 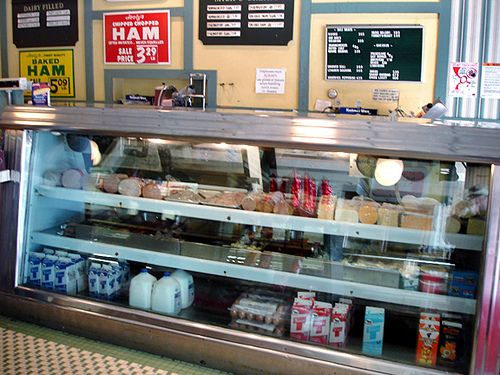 Walking into the place, I found the layout of the deli case still at the front of the store with a bakery section opposite and a small restaurant counter and booths at the rear. The set-up all so familiar. I was surprized and elated. It was like walking back in time to the 1970’s store.

However, the truly wonderful surprise came when we ordered a couple of cheeseburgers for lunch. To my delight, our grill man scooped fresh ground meat out of a plastic bin from under the counter and placed the balls of meat right onto the hot grill. A moment later, he smashed the burgers with a heavy metal spatula and let them sizzle. Then some thinly sliced onions went down alongside the burgers, followed by two hamburger buns laid on the other side the sizzling patties. In short order, the buns were coated in a shiny dome of grease. Another flip of the burgers, a quick slap of American cheese on the freshly flipped meat, a few moments to allow the cheese to melt on top crisping a bit as the hot cheese hit the griddle and they were done. 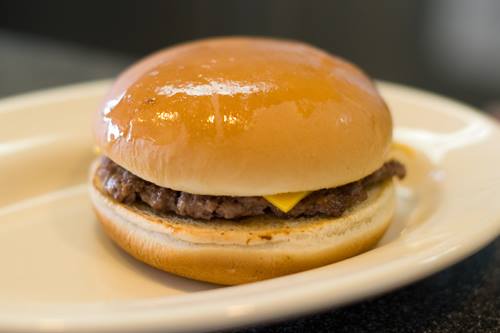 When the burgers were set before us, they didn’t look like much. That’s what fooled me. One bite into the burger, however, told me that this humble dairy store had mastered the perfect cheeseburger. It was a quintisential ratio of bun to meat and the lettuce, tomato, mustard and mayo fixings made it a consummate creation. Heaven help me, I had forgotten.

The Isaly’s is gone now, but that memory and my reintroduction to the perfect Isaly’s cheeseburger remains.

(Photo Credit of the downtown Irwin Isaly’s (my Isaly’s) to Brian Butko, author of Klondikes, Chipped Ham, & Skyscraper Cones: The Story of Isaly’s).

The Isaly Dairy Company, founded as a milk route in 1899 in Mansfield, Ohio had hundreds of Isaly’s stores throughout Ohio, Western Pennsylvania and West Virginia. Isaly’sbecame famous for their Skyscraper ice cream cones, Klondike Bars and Isaly’s Original Chipped Chopped Ham. This Isaly’s, on Main Street in downtown Irwin was opened in 1945 by Art Lewis and was subsequently owned and operated by Richard Lewis, his son, from 1988 until it closed in 2006.