The San Diego Chicken Pie Shop…
I have never liked chicken pot pies. I know why too. My mother used to serve us kids those Swanson chicken pot pies all the time. The rubbery chicken turned my stomach. I would only eat the crust and that was not permitted in our house growing up. So when I moved to San Diego in the mid 70’s I was reluctant to try this place. I mean, I must’ve passed it dozens of times without giving it a second thought. At that time it was located at the corner of 5th & Robinson, but has since moved to a larger more modern facility on El Cajon Blvd.
Then one morning, a friend of mine from the San Diego Reader asked me to meet her at the Chicken Pie Shop for a late lunch. I agreed, but figured I’d get something else on the menu. When I arrived, I was taken with the fabulous interior…like out of a movie. I still remember the waitress that took our order (I would see her often on return trips before I eventually moved to Seattle). She called me “hon” and I wasn’t sure if it was part of her routine, but I still liked it. I also remeber that I was going to order something else on the menu…it’s actually kind of a retro coffee shop that’s been around since 1938 so I was going to order breakfast…probably biscuits and gravy (though this many years later I can’t remember WHAT I was GOING to order that first time!).
At any rate, as soon as I told the waitress what I wanted, my dining companion asked, “You’re not ordering the Chicken Pie?”

I started to stammer my silly Swanson pie excuse, but she shook her head and told the waitress to bring us two chicken pie dinners which included mashed potatoes, a short crust chicken pot pie, both smothered in a yellow chicken gravy, peas, coleslaw, a few soft dinner rolls and a dessert (Always get the pie).

I’m so glad my friend insisted.
Of course, it turns out it was absolutely NOTHING like those inedible Swanson frozen pies. In fact, I realized that I had deprived myself of chicken pot pie based on ONE version.
I would come back time and again to the Chicken Pie Shop. I wouldn’t order the chicken EVERY time because they served a lot of other great food too, but I did eat a lot of chicken pies while I lived in San Diego. Pure comfort food. Their dessert pies were also great. Wonderful crusts. The place was never packed, the service was always fast and the waitresses were always part of the theater of the place. Back in the mid 70’s I was young and the rest of the customers were gray haired and seemed to linger there like they had nothing better to do. I can proudly say that I became a regular there.
Wish I could sit at that counter and order some pie now! 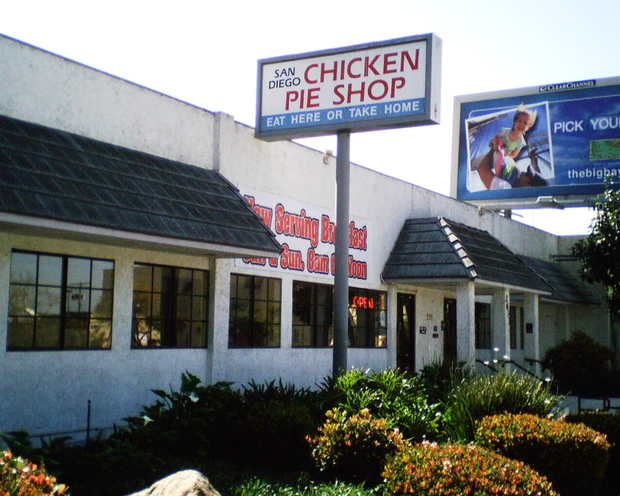